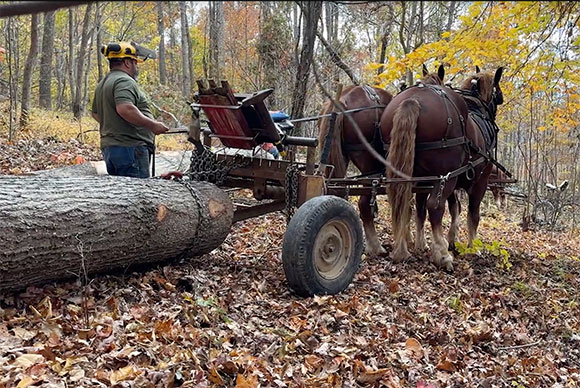 What a beautiful autumn we have been enjoying here. The warm sunny days have been pleasant for being outside, whether on a walk in the woods, working in the yard, or covering an event for our magazine or television show. Here, the weather provided a good crop for farmers and dry ground to harvest it. Once most of the corn and soybeans were collected, we were graced with a 2-inch soaking rain spread across a day and a half.

° ° °
One of the places I visited this autumn to cover for our television program was near Gate City, Va., where Chad Miano and his son, Frank, were selectively removing hardwood trees with their Suffolk Punch draft horses. I'd met Chad and Frank a couple times before, but never spent much time with them so I was glad to have most of a day to watch as they felled, bucked and skidded hardwood and pulpwood down a mountain to their landing.
Chad is a highly-skilled horse logger who makes the work look much easier than it is. I watched as he brought out two teams from his trailer, remarking how big the first team was for Suffolks, when he said “those aren't the big ones.” The next team was huge.

I had a great time watching the two Miano men work, often wordlessly, as they made quick work of several large, mature trees being harvested to make room for younger trees coming up. I especially liked how Chad would always pause a second or two before answering a question, making me understand he was weighing his answer more carefully than a lot of folks I talk to. One of the things we talked about was Chad's truck and trailer being stolen in late summer. Although he eventually got them back and the thief was apprehended, Chad lost a lot of tools and equipment stored in the truck and trailer.

We'll have an episode on Chad's logging operation in February 2023. In the meantime, you can see some of the footage on our YouTube channel: YouTube.com/ruralheritage.

° ° ° °
Lynn Miller at Small Farmer's Journal has come out with a new book to add to his existing excellent reference library. The Harness Book has over 300 pages of text and illustrations. I ordered a copy the moment I heard about it and look forward to reviewing it in an upcoming issue. It is available at smallfarmersjournal.com.

° ° °
Speaking of Lynn Miller, he was one of the guest presenters at an online symposium hosted by Paul Schmit of Schaff Mat Päerd (work with horses). The event provided reports by draft animal authorities, particularly from European smallholdings. Other presenters included experts on permaculture, academic research into draft animal power, implement design, homesteading and other topics.

Tillers International board member and Michigan State University Professor Tim Harrigan gave an in-depth discussion of the utility of shallow tillage as it relates to draft power among other findings. Jelmer Albada of The Netherlands talked about how he has used draft animal power for most of his white and green asparagus production. Ranko Gantner of the University of Osijek in Croatia explained how green manuring, sometimes after crop harvest, can improve soil fertility. Many others involved in draft animal farming provided unique perspectives on the topic.

We will have a few stories in the next issue with speficic details from the symposium.

° ° °
We learned last month that Pioneer Equipment is discontinuing manufacturing farm machinery after 44 years. The company will continue with their other manufacturing operations including Pioneer Carriage, Flexture and custom manufacturing. Approximately 24 product lines will be sold at auction Dec 28, at the Mt. Hope Event Center. In addition, 250 to 300 pieces of new Pioneer equipment including plows, PTO carts, cultivators, wagon running gear, forecarts and more will be sold at auction that day. Check out the Air Works Auction ad on page 19 to learn more.

I have visited Pioneer Equipment a half dozen or so times in the past 10 years, and each time I am amazed at how much they've expanded since the last time I was there. My last visit, this past summer, I saw even more growth and learned of their plans to begin powder-coating in-house which will mean adding a sizable addition to the factory. When I talked with founder Wayne Wengerd at the 2022 Horse Progress Days in Montgomery, Ind., he told me he had never expected they would grow so big and be manufacturing so much non-agricultural equipment.

The attention to detail, rigorous testing and thoughtful research the firm has employed over the past four decades in building plows, forecarts, cultivators and more has also served them very well in other markets that continue to expand as the draft animal implement market has slowed.

Indiana farmer Rick Clark of Green America, Jeff Moyer of Rodale Institute, Steve Nygren of Serenbe in Chattahoochee Hills, Ga.,, and several other leading proponents of regenerative agriculture spoke before the House Agricultural Committee in September. This hearing and others like it are available on YouTube.

They encouraged Congress to support regenerative agriculture practices when the 2023 Farm Bill is drafted. Their testimony was particularly persuasive as it contained many real-world examples where regenerative agricultural techniques improved the soil, increased yields, reduced costs, protected investments and produced better ag products.

Jason Julian once told me that while people talk about national security as if it is only about armies invading or computer hacking, we are actually most insecure in our food chain systems, he said, relying on international suppliers of synthetic fertilizers and genetically engineered single-species crops.

One of our regular contributors, Jenifer Morrissey, has been writing on this topic for about two years now in our magazine, featuring stories about North American farmers and ranchers improving their soil, enhancing productivity and reducing costs through regenerative ag techniques.

Even before we knew the stakes, farmers and ranchers were the first environmentalists. When large corporations and financial institutions took hold of production, today's farmers have had much of their environmental control taken away. We need a strong Farm Bill that promotes regenerative ag to help American family farmers and ranchers regain that control. Call or write your representative and tell them.
www.house.gov/representatives/find-your-representative

Contact Joe
As always, if you know of a person, farm, company or event you think we should be covering, either in the magazine or on the television program, let us know. If it is something you, a reader, is interested in, it would probably interest others as well. Shoot me an email at editor@ruralheritage.com or give me a ring. 319-362-3027.