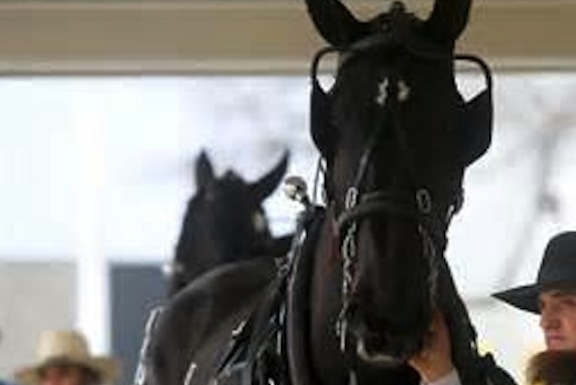 Auctions are an important and fun part of our rural culture. Being in the draft animal business is nearly impossible without buying at least a few things at auction. For every good deal made at an auction, however, at least one bad deal is made. To keep your next deal from falling into the latter category, here are a few tips.

Know the market value for anything you bid on. Let’s say you're bidding on a 24" half sweeney horse collar. The collar is used, but still in good shape. It shows no signs of being spread too far open at the bottom, and the leather is supple, but is marked where the tugs pulled against it around its draft. Overall it's a good collar, but has been used and is nothing you can't find new at a collar shop for $80.

If you buy the collar at auction today, you can take it home and put it on that three­year­old gelding wearing a 23" collar that's getting snug. You figure the collar has been used quite a bit, but has been well maintained, so you decide to bid $60 on it.

You’re off to a good start. You know the value is $80 brand new. This collar isn’t new, but is a good collar you can take home today and save $20. Then you get to thinking you’ll want to buy a pad for it. When you show up at your collar shop to buy a pad for your new purchase, your collar maker will ask where you got the 24" collar you didn't buy from him. You could say your uncle died and left it to you, or you could tell the truth. Either way, the price of the pad goes up because you didn’t buy the collar from him.

With that in mind, you decide $50 is a more reasonable bid. I like your thinking. Let's take that $50 bid, and move it up to $53. I know you’re trying to save money, but $53 is a smarter bid than $50. How can bidding more money be smarter? The reason you go to $53 is the three other bidders who told themselves to stop at $50. You're not the only smart buyer at this auction. Most people set a limit at an even number like $50 or $100. The next bidder after this even number where most people set their limit often gets the collar.

Now you’ve decided what to buy and how much to pay, and all you have to do is wait to buy it. While you're waiting for the auctioneer to sell the collar, don’t get to shooting the breeze with a long–time friend and forget to bid when your item comes up. Sounds like something you'd never do? That's what everyone says who misses the deal of the century.

The time to bid has finally arrived, now what? You need to know some terms. When the auctioneer says “as is,” that's just what it sounds like. You're buying the item just as it is. If a mouse has chewed a big hole in your collar, that’s the way you bought it. “So much apiece–two times the money,” means you're buying two collars for whatever price you are bidding times two. You’re not ready to bid until you know the terms.

When you decide to start bidding, be conspicuous. Don’t worry about being cool or suave about it. Once you have the spotter's attention you need to concentrate. Know what your last bid was and what the other buyers bid. If you’re not careful you could raise your own bid. So stay alert–this no time to resume that chat with your long–time friend.

With the bidding underway, resist the temptation to get competitive and try to outdo the other bidders. If your limit is $53, stick to it. You really need to bid only once, and a seasoned buyer usually doesn’t bid until the bidding gets near the end. What’s the sense going up to $50 by starting at $15 and going up $5 at a time? Wait until the bidding slows down, then jump in.

If you won the collar, congratulations. If not, don’t second guess yourself. Just because it sold for $67 doesn't mean you could have bought it for that. The bidding might have keep going to $80, in which case you might as well have bought a new collar.

Author
Brandt Ainsworth is a frequent contributor to Rural Heritage. This article appeared in the Winter 2005 issue.