by Bethany Caskey
An American breed of cattle, the Milking Devon, was originally developed from the British North Devon Cattle. In 1623, two North Devon heifers and a bull from north Devonshire were brought to the Plymouth Colony. Valued for its triple purpose abilities to provide milk, labor and meat, the breed spread quickly along the East Coast. 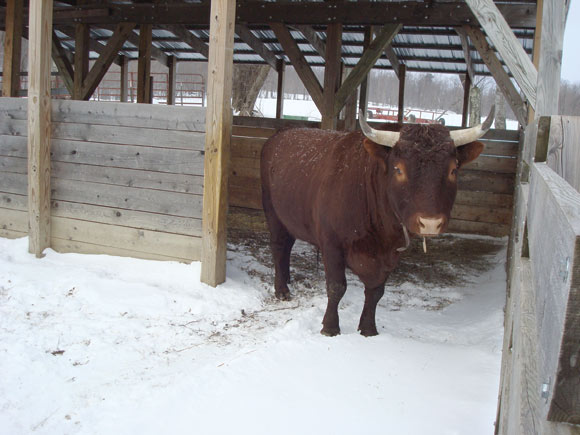 The ready availability of Devon cattle near the British ports of departure made Devons an obvious choice for immigrants to the Americas. In spite of their name, they are perfectly suited to meat production and as working animals. It was the Devon breed that cleared the New England forests and changed stone filled land to useful cropland and cleared the way for small farms and roads. The Devon cattle also went west and were the draft animals of choice on the Oregon Trail. Sometimes called the American Milking Devon, they are considered to be one of the oldest and purest breeds of American cattle in existence. The foundation British North Devon breed is now being bred in Europe primarily for beef production. In its native North Devon, England, the original triple purpose Milking Devon can no longer be found.

The original Devon cattle were developed for several centuries on the southwestern peninsula of England. The name comes from Devonshire, though similar cattle were raised in the neighboring counties. Devons were valued for producing high quality beef and the rich milk used in Devonshire cream. The butterfat content of their milk is comparable to the Jersey, although the volume of milk is not as great. Their high quality milk is popular with micro dairies, cheese and ice cream makers. The increasing popularity of local, organic products also has increased the interest in their milk.

Regarded as the quickest and most active oxen in the British Isles, they were reported to trot at six miles per hour when pulling empty wagons. The breed also had the reputation as hardy, an easy keeper and being able to survive well on rough and scarce forage. This cattle was bred to survive. In more recent times, the importance of cattle for draft animals has all but disappeared, and high producing dairy breeds like the Holstein and Jersey and quick meat-producing breeds like the Angus have replaced the Devon.

The 1868, American Devon Herd Book, Vol. 2, was published in Springfield, Mass., and contained the perfect description of Devon Cattle:

"The late experience of the breeders of Devons only confirms their former opinion of the excellent qualities of the breed, for the three grand objects for which neat stock are kept, namely, milk, work, or beef, and their adaptation to many sections of our country, in preference to any other breed; also that they will produce as much milk, work, or beef, from the food consumed, or on a given quantity of land, as any other breed...The only objection ever presented to the breed, is ‘they are small;’ but we can keep more of them, and that on shorter pastures and coarser food." 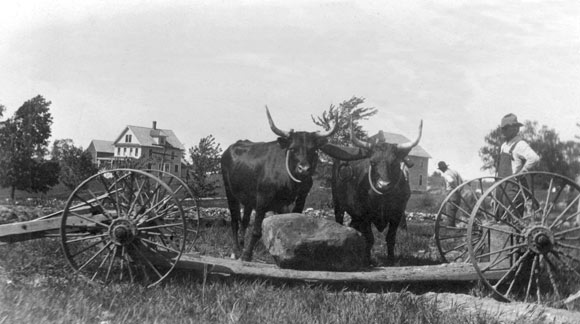 Wheeled stone boat with a team of Devon oxen. Taken from The Canadian Horticulturist, Volume 18, 1895.

The 1920 edition of The Devon Cattle Book states: “That the Devons are an ancient race of cattle there can be no doubt. There is no race in England that can claim such undisputed antiquity. Some authors claim that this breed of cattle were known in England at the time of the invasion of Caesar, 55 B.C. They bear all the characteristic marks of resemblance of the ancient races of the south of England and Wales; even the color, red, is traced in the Devon, Sussex and Hereford.

“This race of cattle was bred by the Ancient Celtic inhabitants and constituted their chief subsistence. History tells us the native inhabitants were proud of their country and prouder of their cattle, their choicest possession. When their country was invaded by their enemies, they fled to the mountains for safety and protection and took with them their cattle upon which to subsist, and were preserved both themselves and their cattle, so that the races of cattle in these districts have been the same from time immemorial.

“They bear the distinction of being the only breed of cattle in which it is impossible to detect infusion of the blood of other breeds. Efforts have been made to improve them ‘as Devons’ but as yet no foreign blood has been found that adds to their excellence or beauty.

“The improvement of this ancient race of cattle, which has resulted in the present perfected breed, was commenced about two centuries ago.

“The native cattle of New England resemble the Devons in many respects, and the fact that most of the early settlers were from the south of England, renders it quite probable that they selected their cattle from that region. It is tradition that a Devon ox at the plow turned the first furrows on the Massachusetts coast. The first account that we have of the importation of Devon cattle into New England was in the ship Charity, in the spring of 1623, in the care of Edward Winslow, one of the Pilgrim Fathers, then agent of the colony of Plymouth.”

Beginning in the 19th century, the Shorthorn breed began to be preferred by American farmers for dual purpose cattle, and, by 1900, the Milking Devon was rarely found outside New England. It was only in this region that the breed remained popular. They continued to be valued for hardiness and the ability to flourish under harsh conditions, qualities that made it superior to the Shorthorn. 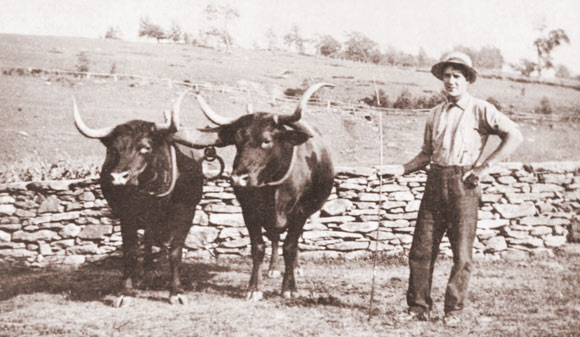 A turn-of-the-century drover poses with his yolk of Devon Oxen. 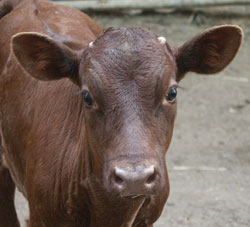 By the 1950s, the market for dual-purpose cattle had disappeared, and the Devon breed was nearly extinct. In 1952, the American Devon Cattle Club decided that the breed had to move into a specialist beef market in order to survive. The majority of breeders began to select their animals for beef qualities. This group was called the Devon or the Beef Devon breed. At that same time, a small group of breeders decided to form a separate association for dairy cattle and maintain the triple-purpose stock of their forefathers. In the 1970s, the breed reached an all time low, with fewer than 100 head. The association dwindled, but, due to their efforts, many of their animals can be traced into the new registry, which was re-formed in 1978. The American Milking Devon breed is now distinct from other Devon populations in the world and is closest to the breed’s original type.

The American Milking Devon is one of only a few truly triple purpose cattle breeds left. They are medium sized: cows average 1,100 pounds and bulls 1,600 pounds. The coat is a light to dark ruby red, and the horns are white with black tips. The appearance is compact, yet fine, with a straight topline, square set legs and well-formed udders. The breed tends to be slow to mature, but is fine-boned and muscular, often weighing more than their appearance suggests. They enjoy a great longevity and freedom from many diseases. The Milking Devon is not a dairy breed in the true sense of the word and has not been accepted as part of the American Purebred Dairy Cattle Association. The dairy-type historically has been valued for use as oxen because of being active, intelligent, and relatively strong for their size. Some present-day ox drovers prefer the Devon. Ox teamster and author Drew Conroy is one. Devons do not put up with abuse or poor training, and novice teamsters are often advised to choose a more common breed of cattle until they have learned to handle oxen. 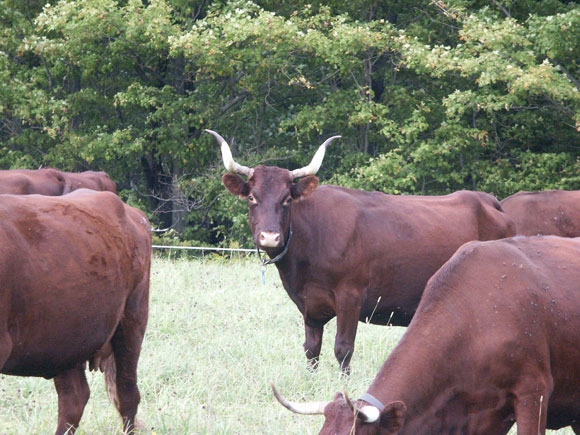 Dan and Alice Singletary raise American Milking Devons at Highland Hollow Farm in Jefferson, N.Y. The Singletarys started raising Devons when the Farmer’s Museum in Cooperstown, N.Y., was selling off stock and the museum’s manager, Joe Caffery, was retiring. Dan bought as many of the cattle as he could and, to his good fortune, Caffery “came with” the purchase. He guided the new owners in the breeding program Caffery had begun at the museum. The Devons have remained the cattle of choice for the Singletarys because of their tractable and intelligent nature.

The Singletarys have three heifers, several steers, a bull and 18 cows that will freshen this year. Hay shortages created a necessary reduction in the herd, and they have been culling for the best and younger animals. Dan says he “is not a fan of saving every genetic scrap, but strives for the best in all facets.” The Swiss Village Farm in Newport, R.I., preserves germplasm (semen and embryos) from rare and endangered breeds of food and fiber livestock and has purchased many of the Highland Hollow Devons.

John and Bonnie Hall of Maple Breeze Milking Devons in Westbrook, Conn., are “a product of the Devon breed” and tenth generation breeders. Both John and Bonnie’s families raised and used Devons since the 1700s. John’s ancestors received a grant from the King of England to settle the original part of the farm in Westbrook, circa 1710. John tells a story about his father driving an hour to take a look at buying a new bloodline bull for his herd. “He found the bull he liked and a woman he liked.” John’s mother, Jane D. Green, was the daughter of the farmer with the Devon bull.

John is the current president of the American Milking Devon Association. The Halls currently have 53 head of Devons, all sexes and ages, and they calve all year round. They use the milk, nurse the calves, use the meat and sell a variety of meat products to farmer’s markets and from their own farm store at Maple Breeze.

The Halls do not personally use any of their Devons for draft, but, when he was younger, John trained and sold calves at the fair as working animals. They still sell six-month old steers to other drovers that use the Devons as oxen. 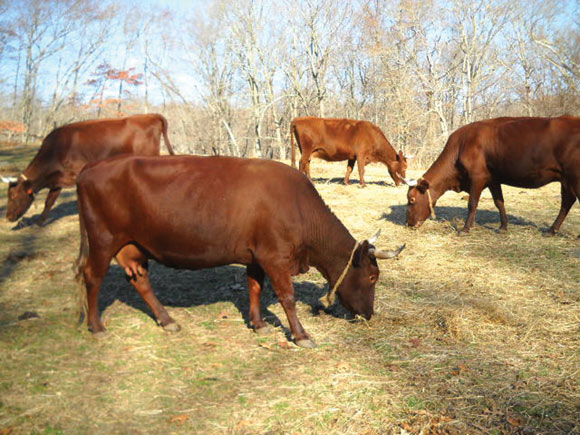 John and Bonnie Hall raise American Milking Devons
Milking Devons are still one of the most endangered breeds of cattle in the world. With the aid of The Livestock Conservancy and Slow Food USA's Ark of Taste, the numbers are beginning a slight rebound. About 600 living animals are registered as purebred with the breed society. John Hall believes there are probably about 1,200 Milking Devons alive in the United States. You can locate more breeders of the American Milking Devon by visiting www.milkingdevons.org.

Author
Bethany Caskey can be found at www.caskeystudios.com. This article appeared in the April/May 2013 issue of Rural Heritage magazine.