Work Horses in a Market Garden: Part 1
History of the Draft Horse 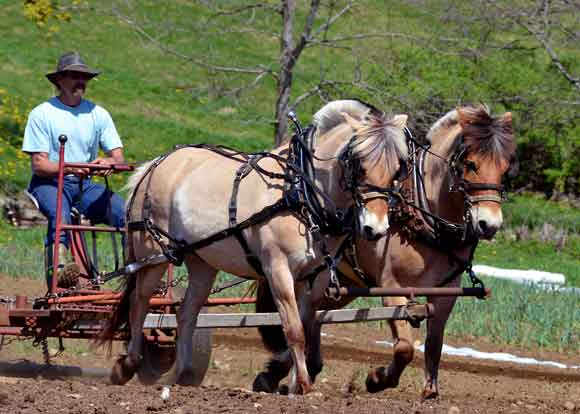 The author prepares a seedbed on his four-acre market garden farm with his Fjord team. Photo by Margaret Fanning
by Steven Leslie

These days many of the young and new farmers who are choosing to utilize draft horse power are drawn to market gardening as a way to make a relatively decent living off of limited acreage. I have always found much good sense in the old maxim that to understand where we are going it is worthwhile to have some perspective of where we have come from. In this article we will take a glance at the evolution of the equine species and the cultural forces that shaped the modern draft horse. The next installment will briefly discuss the five most prominent breeds of draft horse and round out that discussion with a glance at the lighter draft breeds and ponies. Finally, we will join in with several skilled horse farmers for a “teamster roundtable” concerning what qualities make for the best work horse in the market garden. 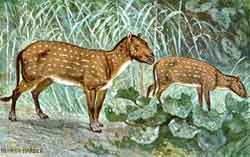 Origins
About 20 million years ago, in what is now known as the Southeastern part of the United States, there existed a marsh dwelling creature the size of a small dog with four-toes on its front legs and three toes on its hind feet. This pint-sized herbivore called Eohippus, the dawn horse, was the progenitor of the intelligent fleet-footed creature running on the single digits of hardened nails, Pliohippus, the first true horse that evolved about 6 million years ago. Although the modern horse is much larger, this ancient horse was fundamentally the same as modern Equs Caballus with whom we share the planet today. By way of contrast, a mere one million years ago, our immediate ancestors were 3-feet-tall Australopithecines just barely down out of the trees. 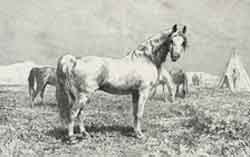 The draft horse breeds with which we are familiar today originated in Northern Europe. They were originally developed by crossing indigenous “coldblooded” horses (historically referred to as the “Forest” or “Flemish” horse) with the “hot-blooded” North African Barb and Arabian horses brought to the Iberian Peninsula by Muslim warriors beginning in the 8th century. Additional stock was later brought into Europe by crusaders returning with spoils from the Middle East.

Though much smaller and refined, the oriental lines brought density of bone and a tenacious endurance to the European breeds. The desert horse also brought a quick-witted intelligence and a sociable nature. The Arabian type horse had been living in close proximity with humans since the dawn of human civilization (even sharing the tents and being hand-fed dates from their Bedouin masters), resulting in a horse that was both smart and highly adaptable.

There is a persistent legend about the origin of the Arabian horse that is told in multiple versions. All the variations on the story agree on one point; there were once seven original Arab horses given to humankind. It is told that each one of these horses carried a message of great importance for humanity: knowledge of the essential virtues that make living worthwhile. These were: courage, loyalty, love, compassion, humility, truthfulness and peace. People already had a means of access to the wisdom qualities the horses carried -- it was contained in their capacity for relationship — but they were unable to receive this wisdom because they had grown deaf to one another. The seven original horses were formed out of a whirlwind and were made to appear with such grace and beauty that humans found them irresistible and were thereby open to hear the divinely inspired message that each horse had to convey.

The Arabian horse has been used throughout the centuries to bring refinement to the heavier and colderblooded (of steady and calm temperament) horse native to Europe. The Thoroughbred racehorse is the oldest and most illustrious result of this improved stock. Most of the heavy draft horses have some measure of oriental blood as do the horses bred for work on the roads such as the Hackney, Cob and Cleveland Bay. In North America, the Mustang carries the blood of its Moorish horse ancestors, and many other prominent American breeds also have an Arabian sire or dam in their family tree including: the Morgan, the Standardbred and the Quarterhorse.

The term Draft Horse as a description of the working animal has roots dating back to the Old English “dray horse,” which signified a horse employed to pull a cart or wagon. A draft horse is any large, heavy horse with hooves in proportion to its size. Draft horses are characterized by a steep angle of shoulder, broad chest and heavily muscled neck, tremendous girth and deep barrel, well-muscled flanks and croup, strong thick bones, a short-coupled back, feathered feet, and a Roman nose. Horses of the draft type usually stand at somewhere in the range of 15–18 hands high (one hand equals 4 inches) and will weigh between 1,200 and 2,000 pounds. Exceptional specimens will exceed these measures. 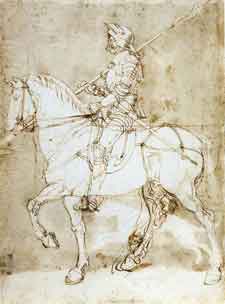 Knight on horseback by Albrecht Durer.

A Brief History of the Draft Horse

The heavy horse breeds we commonly associate with farm work were initially developed to carry knights wearing suits of plated-armor into battle. The total weight of a fully-suited knight carrying weapons was more than 400 pounds! The invention of firearms capable of piercing armor haled the end of knightly warfare. Infantry soldiers wore virtually no armor in order to be fast and mobile on the ground. In a similar vein, the cavalry turned to swift horses to lead the charge into battle. The initial impetus in c Knight on horseback by Albrecht Durer. ross breeding with oriental lines was to develop a lighter, faster cavalry horse. As the role of the heavy war horse became obsolete, the early draft types were placed into service as cart animals and, later, concurrent with advancements in agricultural implements, they took up their role in the fields. Later, these same breeds were used on a grand scale for the movement of people and overland freight prior to the development of the railroad. No longer required for war, the heavy horses went on to become the stock that stoically hauled the goods of commerce and peaceably plowed the fields of Northern Europe. These horses that had originally been bred to the massive proportions required to carry knights and then to haul cannons also proved wellsuited to pull the plow. The addition of oriental blood added the strength and stamina and style we see today in the modern draft horse breeds. Regional types were gradually developed and, eventually, from out of these populations the first breed registries were created. 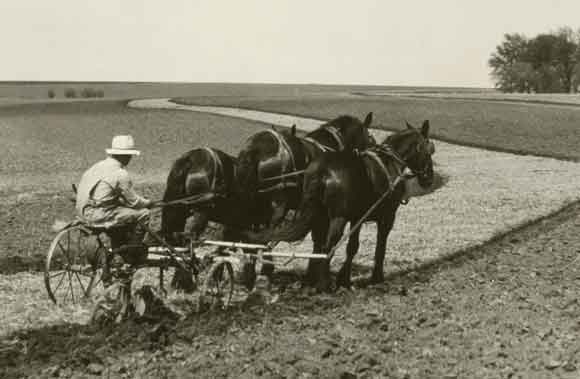 In the early history of European settlement in North America, oxen were relied upon to clear and till the colonial farmsteads. There are even early accounts of poor farmers requiring their milk cow to do double duty as a dairy animal and beast of burden. Horses also played a role in clearing and tilling the land, but their principle occupation was the transport of people and goods.

The most prominent breeds of draft horses being employed in North America today are the Clydesdale, Shire, Belgian, Percheron and Suffolk Punch. All these major breeds of heavy horse were first imported to North America in great numbers beginning in the late 1870s. It was also during this epoch that the breeders associations and stud books were firmly established, regional types were classified, and breed standards were defined.

Prior to this time, horses of more moderate size, as well as oxen and mules, had proved adequate to the tasks of the small farms of the east. The importation of the heavy draft horses of northern Europe to North America was concurrent with the opening up of prairie sod and the accelerated westward expansion of pioneers that occurred after the Civil War. The nation’s stock of horses had also been heavily drawn down by the war. As lands were acquired by treaty or force from the Indian tribes of the mid and far West, more draft power was required to work extensive new holdings. This surge in applied horse power consequently precipitated the decline of oxen as farm animals and created a huge demand for large draft types. At the same time, industry began churning out an array of innovative farm machinery designed to be pulled by these gentle giants.

In 1836, a blacksmith from Vermont named John Deere made the first cast steel moldboard plows and began marketing them to the pioneer farmers of Illinois. Newer and better iterations soon followed. The Midwest farmers began to experiment with multiple hitches of horses that allowed them to farm vast acreage. This inaugurated the beginning of a golden era in horse powered farming. From the 1880s to the advent of World War I, equipment was mass-produced and distributed via the rail system. This sudden access to superior equipment modernized applied animal traction on North American soil. Treadmills that utilized live horse power were invented to run everything from a grain mill to a cross-cut saw. Steam power was applied to stationary harvesting and threshing machines that allowed for the processing of increased yields of forage crops and grains, and new reaper-binders were invented to keep apace. The improved horse drawn technology was spurred on as new farmland conti nued to be opened up in the western plains states. By the early 20th century, North America suddenly became a major exporter of commodity crops to the markets of the world.

The size and speed of the heavy horses and draft-cross mules eclipsed the practicality of oxen. However, the use of oxen persisted on remote farms and in the forestry sector, particularly in New England. Although the period between the First and Second World Wars saw an increase in the introduction of tractors, work horses held their own on the small family farm right up until the 1950s. At this time, there was a concerted effort on the part of industry and the land grant colleges to persuade farmers to “modernize” and forsake the draft horse. 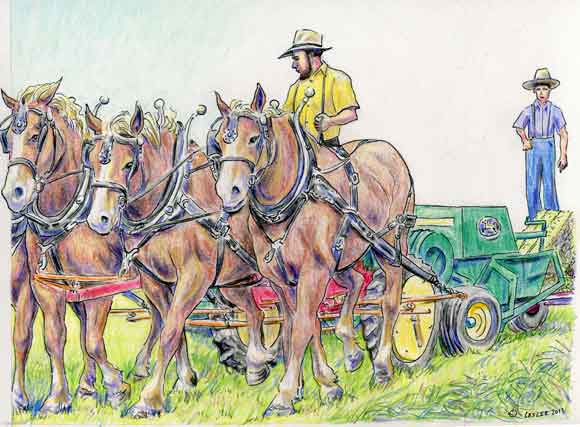 Baling with ground drive cart at 2013 Horse Progress Days. Illustration by the author
In the part two of this series we will take a look at some of the most popular breeds of draft aniimals in use today on North American farms, with an eye towards the characteristics best suited to work inthe market garden.

More Articles in this series:

Part 2 Draft Horse Breeds takes a look at some of the most popular breeds of draft horses in use today on North American farms, with an eye towards the characteristics best suited to work in the market garden.

Part 3 Best Horse for the Market Garden joins in with several skilled horse farmers for a “teamster roundtable” concerning what qualities make for the best work horse in the market garden.