Editor's Note: An earlier version of this study appeared in the Summer 2012 issue of Small Farmer's Journal. In the winter of 2013, the author, Eric Nordell, revised and rewrote the study. We introduce readers to the fundamental findings of the study in the following overview. Case studies listed at the end of the article include more in-depth narratives provided by the participating farmers. 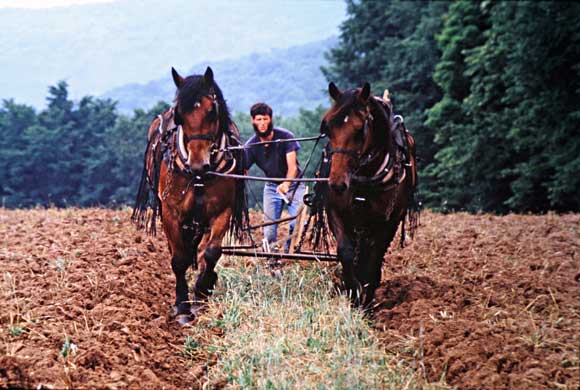 Eric Nordell plows under the stubble of a rye cover crop, finishing the land side of the field. His right hand holds the walking plow handle while he drives the furrow horse. The off horse (left in the phot above) is tied back to its mate. Photo by John Nordell
by Eric Nordell
More and more information is available on the profitability of growing high value vegetables. However, it does not discuss the economics of using live horsepower. Although I do not have a background in economics, I thought it might be helpful to provide a preliminary round of benchmark numbers for the new wave of horsepowered market gardeners. To that end, I asked three experienced teamsters to join me in tracking horse expenses and labor in 2011.

Please keep in mind that this small survey is not meant to be representative of the current horsepowered vegetable industry. There are now thousands of acres of wholesale produce grown in Plain communities across the United States and Canada. The teamsters in this horse accounting project make their living from small-scale, organic market gardens (2-5 acres of vegetables) selling directly to the customer via CSAs, farmers markets and restaurants. 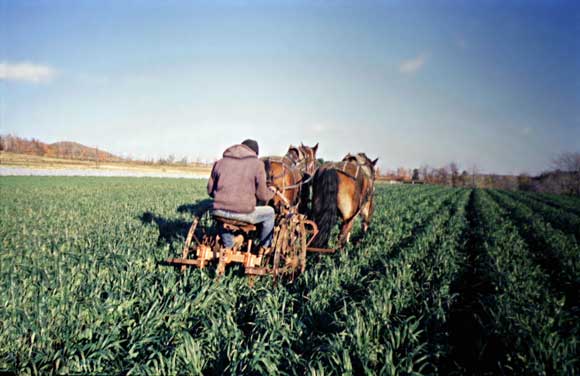 Eric establishes a furrow in a cover crop of oats where garlic cloves will be planted by hand. The riding cultivator has been modified with a single central shank to create the furrow. Photo by Anne Nordell.

Due to the small size of our operations, hours spent on horse-powered fieldwork turned out to be relatively low. Teamster time, including vegetable production, woods work, hay making, pasture management, farmstead maintenance and horse training, ranged from 229 to 1,303 hours across the four farms with an average of 559 hours. Horse maintenance expenses ranged from $984 to $8,262, averaging $4,050. That is, it cost the teamsters in this project anywhere from $4.30 to $14.40 in out-of-pocket horse expenses for every hour of fieldwork with an average of $8.11 per hour.

This was the only farm in the study that produced all of its horse hay, grain and bedding. Topping the list of horse expenses was fertilizer ($377), veterinary ($224), baler twine ($95), fuel ($90) and seed ($89). This teamster uses a small tractor for combining the small grains and baling hay and straw. He and his wife invested almost 90 hours growing and harvesting the horse feed and bedding — 50 hours of teamster time and 38 hours on the tractor, stacking hay in the barn and other non-teamster tasks.

Keep in mind that the cost per teamster hour is not the best measure for comparing horse powered systems because it does not give any indication of teamster productivity or efficiency. In this study, teamster time for vegetable production ranged from 23 hours per acre to 122 hours per acre with an average of 61 hours per acre. Although there was a strong correlation between increasing h o r s e p o w e r e d fieldwork and higher gross return per acre, our economic analysis was not comp r e h e n s i v e enough to explain the connection or to show if putting in fewer teamster hours necessarily resulted in more overall labor for the market garden such as hand weeding, harvesting and planting. 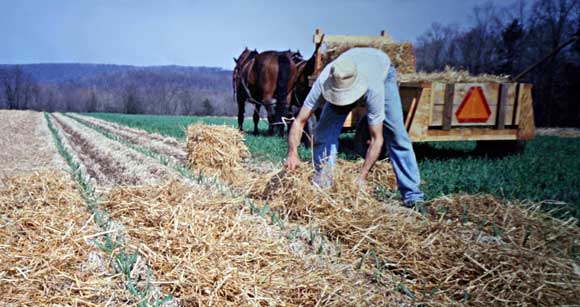 The primary utility for determining the cost per teamster per hour is for putting together enterprise budgets. For example, when developing a carrot budget for our farm we were able to put a price tag on all aspects of production except the cost of using the horses. We kept track of the fieldwork, close to 12 hours of teamster time for the quarter-acre. Now that we know our cost per teamster hour ($7.41), we could fill in this missing budget item: $88.92 in horse expenses for growing the carrots.

As for putting together a business plan, the ratio between horse costs and total farm expenses may be more helpful. Out-of-pocket horse expenses averaged 5.5 percent of total farm costs for the four farms in the project. There was a substantial spread for this number, from 2.3 percent of farm expenses to 8.4 percent. Likewise, the gap was pretty wide for horse costs as a percentage of gross farm income (1.5 – 6.4 percent, average 3.6 percent), partly due to the large disparity in gross income ($65,282 - $177,000 — the latter including income from a 20-cow dairy).

Across the board, horse expenses represented such a small percent of total farm expenses and gross income that it would be safe to say that other costs, such as hired labor and farm supplies, affected profitability more than the expense of maintaining the work animals. Net income, determined by 2006 – 2010 Schedule F reports, ranged from $20,000 - $40,000 with an average of $30,368.

Horse expenses could have a much bigger impact on net income if capital and labor costs were included. For practical and philosophical reasons, this group of teamsters decided not to put a dollar value on labor for horse maintenance. Even so, the real eye opener of this study was realizing that we spent as much time working for our horses as they did for us. Horse maintenance labor as a percentage of teamster hours ranged from 69 - 172 percent with an average of 107 percent!

Horse maintenance hours averaged 510 hours per farm (136 hours per horse) with a spread from 315 hours (105 hours/horse) to 1,059 hours (212 hours/horse). Daily chores (182 – 795 hours/farm, average 350) and cleaning stalls (16 - 160 hours, average 94) consumed most of this horse care time. These aspects of horse maintenance labor may be on the high side because all of the teamsters in this survey stable their work force a substantial portion of every day to collect enough manure for fertilizing the market garden. For the same reason, feed and bedding expenses may be higher than necessary. 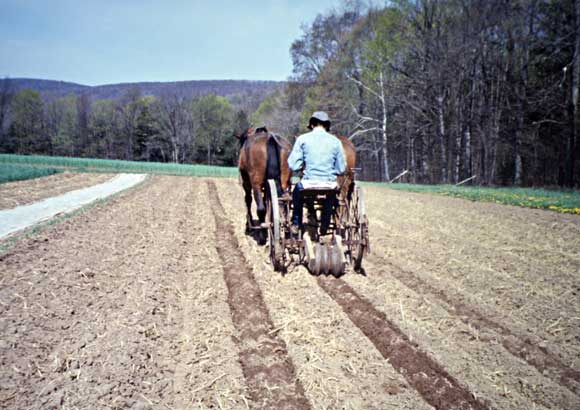 Eric drives a cultivator fitted with a combination shovel and hiller at its front which loosens the soil and a miniature cultipacker at the back to firm the soil and create a narrow ditch or furrow where spinach, beets or salad mix will be direct-seeded with a Planet Jr seeder. Photo by Anne Nordell.

This teamsters union also voted to put the time spent on grooming and harnessing/unharnessing the horses on the teamster’s time clock rather than the horse maintenance stop watch. Harness time (59-248 hours per farm, average 117) represented 17-65 percent of teamster hours (average 35 percent). This inefficiency may be partly explained by the nature of market garden fieldwork resulting in relatively short work sessions.  We also decided not to include horse related capital investments in this study because these fixed costs varied so much from farm to farm and, in most cases, had been paid off or completely depreciated long before the start of this horse accounting project. For those interested in adding these numbers to the economic analysis, the purchase price of work horses ranged from $1,800 to $13,000 per farm (average: $1,750 per horse) and $500 to $1,500 per farm for harness (average: $268 per harness).

Horse drawn equipment collected over the years and currently in use for vegetable, hay and grain production averaged $9,675 with a spread from $5,540 to $13,350. Buildings covered the spectrum from a 12-by-24-foot run-in shed to a 65-by-98-foot bank barn while the land base for horse hay, grain and pasture varied from 2 to 22 acres (average 14).

Depending on one’s location, any one of these upfront costs could be a major investment. Adding these capital costs (amortized over 15 years) and the labor bill for work horse maintenance to the budget could easily double work horse expenses.

In summary, this small survey shows that horse powered market gardening can be profitable because out-of-pocket horse maintenance costs represent a small percentage of total farm expenses. If capital costs and labor for horse maintenance are annual cash expenses, then total work horse costs may become a significant factor in the vegetable farm’s net income unless the majority of feed and bedding are produced on the farm, the efficiency of daily chores and harnessing is made a priority, and financial credit is given for the horse manure used for fertilizing the market garden.

To illustrate the tradeoffs involved in trying to implement these cost-saving measures, profiles of each of the four farms are linked here. Written by each teamster, these farm narratives also emphasize that the rewards of working with horses are far greater than can be conveyed by the numbers.  Three of the teamsters in this informal study tracked the time spent on specific farm tasks. For this purpose, individual horse hours were recorded to highlight the amount of live horsepower used. That is, three hours plowing with two horses was recorded as six horse hours of primary tillage while one hour discing with three abreast was tracked as three horse hours of secondary tillage.  Unlike teamster hours, harness time was not included in the horse hours accounting. So-called “non-productive work,” such as commuting to the fields or when the team is hitched to the manure spreader or harvest wagon while it is loaded, was dutifully recorded for both teamster and individual horse hours.

Author
Anne and Eric Nordell have operated Beech Grove Farm with live horsepower for 34 years, certified organic since 1987. This article appeared in the
December 2014/January 2015 issue of Rural Heritage magazine.