Editor’s Note: In his introductory article (link below), Eric Nordell provided an overview of his updated study (first published in the Summer 2012 issue of Small Farmer's Journal) which tracks the economics of four horse powered market gardens. Below we learn the specific details of Eric's Beech Grove Farm operated by Eric and his wife Anne. You will find links to the three other case studies in this series at the end of this article.

Half acre field in the Nordell's market garden alternate between vegetables and cover crops.
by Eric Nordell
My introduction to farming with horses was a little unusual. I had the opportunity to work as a hired hand on Amish farms in Lancaster County, Penn., for two summers before working my way across the country on farms of all types and sizes, many of them horse powered operations. Even with all of this hands-on experience, a steep learning curve was inevitable when we started farming on our own and had to figure out for ourselves how to grow vegetables with live horsepower.

My initial attraction to animal traction was philosophical. Work horses fit my ideal of sustainable agriculture by supplying solar power and homegrown fertility for the fields. Through the influence of two special mentors, I developed a love of working horses that has sustained my interest in farming over the past 30 years. This love of working horses is one reason Anne and I designed the market garden to utilize our partners in harness as much as possible.

Our 89-acre farm is located in the mountains of north central Pennsylvania and is comprised of approximately 45 acres of steep or poorly drained grassland, 6 acres of class II silt-loam soil under dry land cultivation, and another half acre of irrigated gardens where we grow herbs and hoop house vegetables. The farm also includes 25-30 acres of woodland, which has supplied most of the lumber for various outbuildings (packing shed, woodshed, machine shed and the wood-fired, bench-heated greenhouse). We use the original 30-foot-by-50-foot dairy barn for stabling the horses, storing their purchased hay, bedding and grain, and hog composting their manure.

We plant half of the cultivated land to produce each year (about 3-1/4 acres), 85 percent of which is sold at one farmers market in nearby Williamsport. Other markets include two fine dining restaurants, a culinary school, bulk sales of root cellar crops to individuals and a company that makes tinctures from medicinal herbs.

Anne hires a crew of friends to help her at the market stand on Saturdays. In recent years, we have also employed a young neighbor to help in the packing shed, typically 12 hours a week. Otherwise, it is just the two of us who grow and harvest the vegetables.

Our motley crew of crossbred horses is currently composed of a mismatched team of middle-aged geldings and a 32-year-old mare who has been farming this land since our first growing season in 1983. We are also caring for an elderly rescue mule whose only job is to produce manure.

I use the geldings as a team for the heavier fieldwork, and pair the slower, steadier of these horses with the semi-retired mare for precision work like laying out beds, marking planting furrows and cultivating. However, due to the arthritic-like deterioration of one of the geldings, we used the other gelding alone for much of the heavy fieldwork in 2011.

Whenever possible, I take a hands-off approach to horse maintenance. The horses go out to pasture on their own where they do their own grooming and help themselves to water at a spring overflow. They can also water themselves from the bathtub in the stables during the harnessing process. This hands-off approach saves a few steps. The downside is the horses get very little practice on a lead line, lifting their feet and other extra agricultural handling.

In every other respect, our horse chores are pretty inefficient. During the winter I make four trips to the barn for three feedings of hay, rearranging the bedding in the stalls and turning the horses out to pasture for six to eight hours a day. I also spend 10 minutes each day sprouting their daily ration of oats and barley to improve the digestibility of these certified organic whole grains for the older horses.

Daily horse maintenance is less time consuming in the spring, summer and fall when the horses are stabled during the day and pastured overnight for twelve to sixteen hours. However, this s avings in labor is more than offset by the time required for moving fence and mowing our super-sized horse pasture. Depending on the growing conditions, we use eighteen to twenty-five acres of the better grassland for year-round grazing. The payoff for pasture maintenance is a much reduced hay bill. We can get away with fewer than 250 bales a year for our four 1,400-1,800 pound animals.

On the other hand, we spend a lot of time and money on bedding the horses, going through 250 to 300 bales a year of oat straw and a bare minimum of 24 bales of peat moss. Our goal is to capture all of the manure and urine in the horses' straight stalls and bulk up those precious nutrients for composting with heavy hogs. As a result, we have been able to maintain soil fertility in the market garden with the manure from four large animals plus small quantities of rock minerals and lots of cover crops. The extra attention to bedding also keeps the horses remarkably clean, eliminating the need for grooming.

The following are some of the insights I have gained from participating in this horse accounting project:

Judging from the other farms in the study, we could eliminate our hay bill altogether if we shifted the labor and fertilizer we invest in our extra-extensive pasture to putting up hay for the horses. We have been reluctant to close this gap in self-sufficiency because making horse hay in late June and early July could create a labor crunch when we are already super busy picking strawberries, lettuce, spinach and peas, plus preparing the fields for planting fall vegetables. Pasture maintenance, by contrast, can be spread over the whole growing season as time permits.

Putting a stopwatch on horse maintenance also showed us that taking care of four animals versus just the three horses used for farm work only adds a couple of minutes to daily chores. From a labor perspective, keeping a fourth animal just for manure production turns out to be fairly economical.

However, tracking horse expenses made it clear that out-of-pocket costs for stabling a non-working member of the herd really adds to the expense of the compost. Consequently, we are trying out different manure management systems and compost application rates to see if we can maintain fertility in the market garden with the manure from the three work horses.

Another surprise was finding out that my teamster hours were remarkably similar over the two years of the study (455 hours in 2010, 457 in 2011) despite using a single horse for half of the heavy fieldwork this past year. I think this consistency in teamster hours suggests that 450 hours is about the maximum amount of time I can dedicate to working the horses during the growing season and that I can accomplish the fieldwork more efficiently when necessary. It also means I have the pleasure of spending a quarter of my farm hours with the horses.

One consequence of using a single horse in 2011 was a one third reduction in horse hours compared to 2010, significantly increasing the cost per horse hour (from $2.91/ hour to $5.76/hour) and the ratio of horse maintenance to horse work (35% to 54%). Ironically, what seemed like an improvement in work horse efficiency by going single makes live horsepower look more expensive and labor intensive on our farm. In this respect, teamster hours might provide a better measure for work horse efficiency and productivity than horse hours. Our horse costs per teamster hour were much more similar between the two years ($5.63/hour versus $7.60/hour) despite an $800 increase in horse expenses in 2011, and the ratio of horse maintenance labor to teamster hours was virtually identical (69 percent).

Either way, the high number of teamster and horse hours on our farm was not a big surprise. After all, our original goal was to use the horses in the market garden as much as possible. The recordkeeping, however, gave me a much better picture of how all those hours were allocated. For example, I had no idea that I spent a quarter of my teamster time sitting on the riding cultivator, primarily for nontraditional purposes, like under-cutting cover crops, managing living mulches in the vegetables, minimum till planting, and forming or renovating the single row beds. Only a handful of those cultivator hours were devoted to weed control.

Tracking horse hours also underscored how much time I spend on preserving soil moisture, reducing weed pressure, and establishing/managing the cover crops as reflected in the large number of hours dedicated to secondary tillage. From a business standpoint, I am not sure whether these extra passes over the fields should be written off as recreational tillage or considered a boost to the bottom line in the savings of labor for weed control, irrigating, etc. 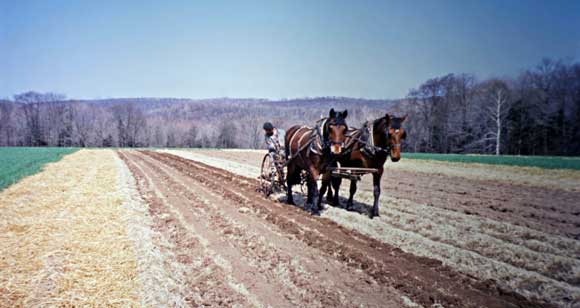 Horse drawn ridge-till, one of hte many non-traditional uses of the riding cultivator at Beech Grove Farm.

But the real surprise from this recordkeeping exercise was finding out that 40 percent of our horse hours could be classified as non-productive work. In addition to harness time (averaging 20 minutes per work session) and a 5-10 minute commute to the fields, our work force spends a lot of time standing around on the job. I often hitch the team to two or three implements during a work session, each one sometimes requiring setup or adjustment. After marking a furrow for transplanting or renovating a bed for direct seeding, the horses may stand for as long as an hour hitched to the cultivator while we do the planting by hand. And then there is all the time the horses spend standing in harness while we load compost, fertilizer or field stones by hand.

Our horse hours would be even higher if we used the team for the daily harvest of greens. We find it easier and more convenient to move these perishable crops from the fields to the packing shed using the wheelbarrow and pickup truck rather than bringing the horses in from pasture before daybreak and harnessing them up for yet another stand-around task. By the time we have finished the morning picking, the horses are usually waiting at the barn for their breakfast.

Anne and Eric Nordell operate Beech Grove Farm in Trout Run, Penn. They host an annual farm tour where people interesting in their farming system have the opportunity to study it first-hand. To register, write them at Beech Grove Farm, 3410 State Route 184, Trout Run, PA 17771. This article appeared in the August/September 2015 issue of Rural Heritage magazine.