Economics of Farming with Horses:
Operational Costs for Horses** (part 6 of 7)

An annual operating cost of $730 for two horses represents a good rule of thumb, according to a comparison of two Amish farmers—
C. Miller of Shipshewanna, Indiana, and R. Yoder of Mio, Michigan. 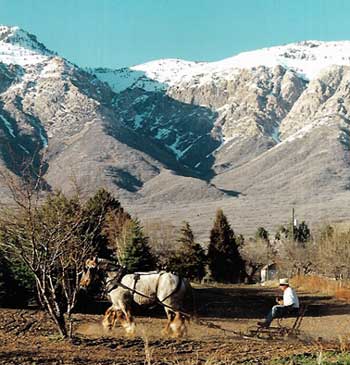 Hay may be purchased at $2, one-half bale per horse per day. Horses are fed hay for seven months of the year and graze for the other five months. The total hay cost is $425, leaving $305 for grain, veterinary, and miscellaneous expenses each year.

The assumption is that the land used for the five months of grazing is best utilized for livestock grazing. This kind of grazing forage might be located on ground too steep, too rocky, or too wet for other uses. For example, it might be field corn stubble, the groundcover in orchards, at the sides of roads and lanes, or at the corners of a center pivot irrigation system. It might be land that is communally held or has been placed in a conservation program.

Even if grazing is not available and hay must be purchased for the entire year, using draft horses on a small sustainable farm is still a revenue function and the basic conclusions and recommendations
do not change.

**Because Chet Kendell wrote this economic comparison of tractor versus horse farming in 2005, the figures will need to be adjusted to reflect present values. That said, we believe its fundamental conclusion, that tractor farming incorporates a negative cost function that decreases profits while horse farming includes a livestock production function that boosts its economic outcome.
Author

Chet Kendell was on the Economics faculty at Brigham Young University - Idaho in Rexburg. He currently owns Kendell Innovative Dairy Systems LLC in Idaho and lives, farms and writes with his family in Ashton, Idaho. This article appeared in the Spring 2005 issue of Rural Heritage.