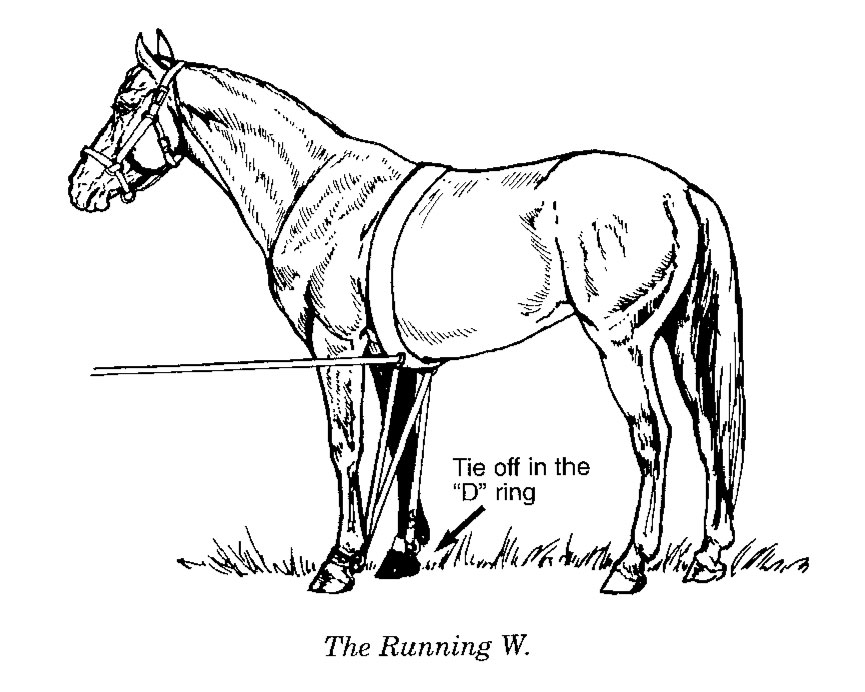 We used it on certain driving horses we were training on our farm. We never used it as an emergency brake, however. When we used it we usually had the horse on a long line and used it to teach the horse to better learn the command "whoa". We had an indoor arena with thick layer of sawdust and generally "bagged out" the horse once it was laid down. Done in an unhurried, unemotional manner, it was very effective in making a nervous, dangerous horse less so. But we spent a lot of time with the horse on the ground, talking to it and making it relaxed.

I have never seen it used as a safety device in a hitch. Maybe someone who has will chime in.

Joe
Response by Paulk at 2013-08-22 09:27:33
Thanks Joe, it has been suggested as a means of breaking a horse or mule from running away. I was thinking of possibly using it the next time I have an unfamiliar animal that is supposed to be broke to drive and also on my sons pony once we graduate from the sled. Since he run away with the buggy once, I don't want it to become a habit. I have been told some will use it on hard ground or too much and cause knee problems and that's the last thing I want. Paulk
Response by Bullfrog 1959 at 2013-08-22 16:26:00
Only been doing this for a short time but I had a horse that I was trying to break had no luck every thing I tried she would run away .I was told by some old timers about useing a running W. I got one found some soft dirt one day did not hook any thing behind her when I said whoa she did not stop I dump her . She learn fast . I would hook her to a cart put the runnings W on her if she started to cut up I tighten up on rope she would straighten up. I would use one for e-break. I am a believer in brakes also.
Response by Randle at 2013-08-22 18:39:37
Some may not agree, which is understandable, but... a whole heck of a long way BEFORE I'd try a 'W', I'd do a bunch of groundwork training a 'one-rein stop'. I know some horses may still run through a one-rein with their head bent to the side. but my experience has been that if the horse is light in responding to the one-rein, then they have a good whoa too.

Like with an engine, we seem too often eager to pour Engine Honey in the crankcase instead of replacing a worn gasket. The one-rein and solid groundwork is like replacing that gasket.

The 'W' is nothing to fool around with. I used it ONCE, with the help of a knowledgeable 'old-timer', and was still swallowing my heart the whole time.
Response by Jonathan Shively at 2013-08-22 19:34:10
I used it three times on the same belgian stud colt. He was 2 years old, big as a barn and had gotten used to getting away from his handlers. Owner asked me if I knew how to put on a running W. Had an idea, got the rings and straps and put it together. That horse got away from the owner and I pulled (thinking I really had to pull hard). Man that horse just slid to a stop and laid on his side. Owner was mad at me for not letting him get a run. So, I let him get a run the next time, he rolled butt over teakettle! Really thought I had broken his neck. We walked him all over the farm, couldn't get him to run anymore. All at once, out of nowhere he took off, I had a knot at the end of the trip rope, I held the knot and rolled him again. Third time was the charm, he was used for a stud for years and visited him at the farm he was standing at and they remarked how light he was on the lead! Nothing to fool with, but in extreme cases, extreme measures must be used. I don't think I would be driving anything I needed a running W on while they were in harness, would be very stressful for their teammate and if in shafts, would be a complete disaster if the shafts survived.
Response by Dris Abraham at 2013-08-23 09:18:13
Dont want to start a fight but there is no need to throw a horse. Pleanty of other methods to get them where you want them to be.
Response by Dale Wagner at 2013-08-23 09:34:10
Why are you worried about hurting a horse or mule with a running W? If they don't know whoe, they are worthless so what difference if you kill them? Might save someone from getting hurt.
Response by KC Fox at 2013-08-23 22:37:47
I buy them wherever take them home if there broke hook them up and go. the Running W is part of there harness for a while until I decide they wont run away. I call it on job training, some have wore the W for 3 months before they quit trying to run all you had to do was move the rope 6" and they would settle down and walk. We were feeding cows 6 1200 lb bales a day. As yet I haven't hurt one yet & had some runaway's without the W and had to rebuild the cart & bale pickup so could feed tomorrow that is not fun, having to work on equipment most of the night. I don't worry about hurting one if he don't mind he is not any good anyway. Just what we do, you do what you want & good luck to you & yours.
Response by kevin fort causeway at 2013-08-23 23:00:46
I prefer to work and sack them out in a round pen/small corral, if/when they decide to take off, you keep them moving whatever direction you choose, past when they want to quit.
Then ground drive in the round pen, same thing.
Then start them outside the round pen/corral.

But if a horse is loco and wants to climb the round pen walls, we have used the running w with success. It sure gets inside a horses head, especially the big rank ones who have abused a couple trainers in the past and are used to getting their way, away....