Buck Bucholz
Posted by rdennis at 2012-02-13 10:26:56
Got to thinking after my last post on here, I mentioned Buck Bucholz from down in the northwestern corner of Nebraska. He is one of the few who was still using teams to put up and feed hay. He is a legend in that area and around these part and a hero to many of us who know about him and his horsemanship. Maybe you folks have never heard of him.

I have a friend, who, years back, made an appointment to go see Buck and maybe buy a team from him. It was middle of the winter and Kim, my friend, got there a bit before daylight. Buck stepped out of the house and told him to come in and have a cup of coffee and maybe a bite to eat. They did. Then they walked out to the barn where 6 Percheron's were standing, already harnessed, in their stalls as Buck had already been out before Kim had arrived.

Buck opened the big doors wide and then walked up and untied every horse in succession and they walked out the door by them selves. Kim said when they got to the last one, the turned him loose and then followed him outside and there were all of the horses standing in the yard, lined up as they would be for 6 abreast. Buck walked up and hooked all his lines and cross ties up and then drove to a hay sled and they went and fed cows.

Buck told of having a set of teams one time who were so good and well trained that he decided to see just how long he could drive them while feeding and not have to pick up a line. Just use voice commands alone. Someone asked how it worked out., He said, "Worked real good for about a month then I just had to pick up one line to help straighten out one horse." I do not think he was lying or bragging. Just stating facts.

You are right. He is an amazing horseman. We have his name as Buck Buckles, however.

We have featured photos of Buck and his Percherons several times in our draft horse calendar. Here are two photos taken by his wife, Joan, so you can all see what rdennis is talking about. 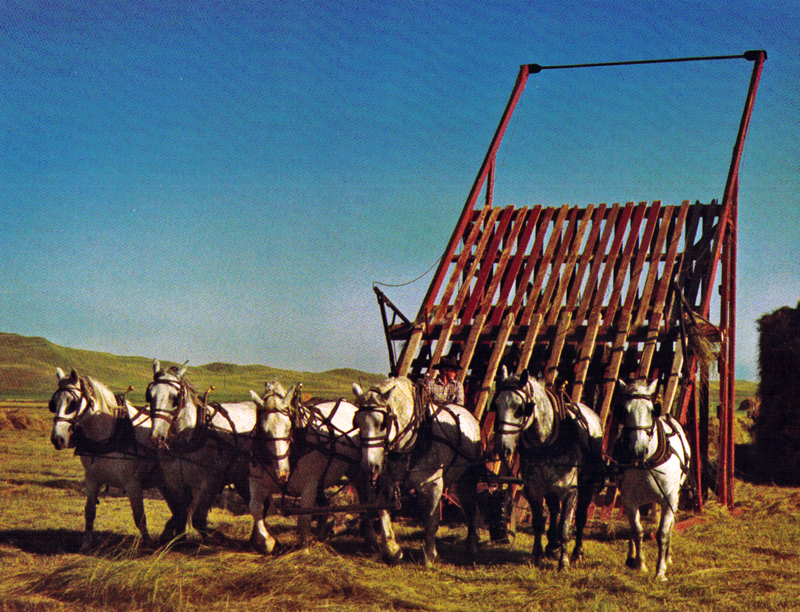 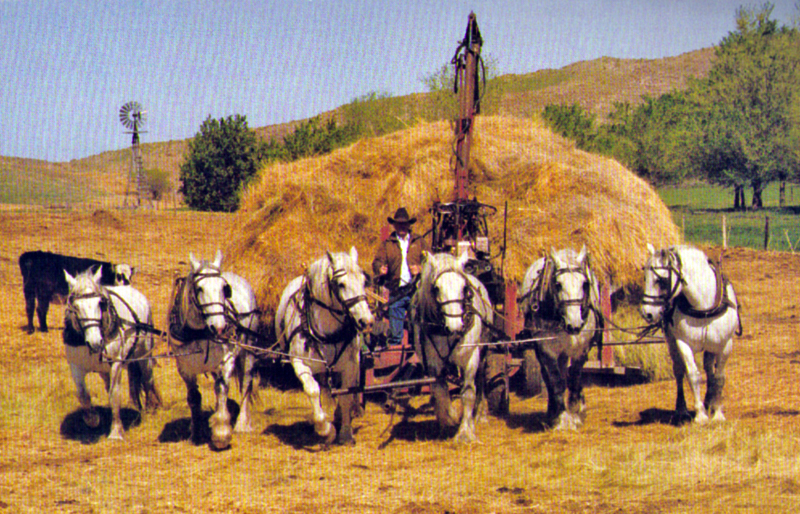 Joe
Response by smith at 2012-02-13 22:01:16
Great story and photos thanks for that.
Response by Keith at 2012-02-13 22:40:13
Nice pictures. What is the apparatus in the second photo?
Response by Tim B at 2012-02-14 07:20:02
Wow , that is awesome .
Response by Bret4207 at 2012-02-14 07:35:05
Nice to see some drafty Percherons. No horses on stilts there.
Response by Marshall at 2012-02-14 08:14:58
Keith,In the second picture that is a knuckleboom with a claw on the end. He gets a claw full of hay and swings it around and drops it on the ground. That is the way he feeds his hay.
Response by Klaus Karbaumer at 2012-02-14 10:13:20
Joe, I have to confess that years ago, when I still lived in Bavaria, I used the second picture as one of the transparencies for the overhead projector in presentations I gave to local horse clubs about the amazing things that were going on in farming in the USA, since the reputation of US farming was that it was all tractorized and that horses had completely disappeared.
Response by rdennis at 2012-02-14 10:39:39
Keith, as Marshall said, that is how he feeds the hay. they call it a sled and pull the hay on using the team, with a chain or cable that goes from the far side of the bed of the sled, around the stack and back across the bed to the horses. As the horse move forward the hay moves on to the sled and the sled can kind of be drug under the load also, they tell me. I have never done it that way, tho' I used to load lose hay from Haybuster stackers, with a needle and thread. The bed of the sled can be tipped to the ground, from side t side, so as to make it easier to load the hay. works good on them big flats they have in that country. Not so good up here, tho' I think I could make one work. They did not use to use the hydro fork on the front, just drag forks or pitch forks. One man can feed a lot of cattle with this rig.

Sorry Uncle Joe, I wondered about my spelling of the last name. But knew if I spelled it that way most would understand the way it is pronounced. Never thought about you having pictures of him. Somewhere out there on the internet is a nice video a TV station made about him a year or so back.

Speaking of hydro forks. I had a friend who fed with teams in Northern Colorado. Wagons until the snow got too deep, which was soon in most winters. They put up and fed the big square bales. they had a hydro fork made and setting on a set of runners with a gas motor to run it. You pulled up next to the stack and then started the hydro fork and used it to load the big bales onto the bed. When you needed to move it, if it wasn't frozen down, you could push and pull with the fork to slide the unit closer or farther away for ease of loading. Looked like a slick set up from the pictures I saw.
Response by Frank Ise at 2012-02-17 08:05:13
That is a really slick article and pictures. Can understand why Klaus used them for his demonstrations.
Response by KC Fox at 2012-02-18 21:40:27
we call that a hydro fork it has some tines that open & close to grab a wad of hay and drop it to the side of the sled to feed cows it dont take long to feed a stack of hay with that. the story is proof the more you use them the better they get.